Face recognition identifies persons on face images or video frames. In a nutshell, a face recognition system extracts features from an input face image and compares them to the features of labeled faces in a database. Comparison is based on a feature similarity metric and the label of the most similar database entry is used to label the input image. If the similarity value is below a certain threshold the input image is labeled as unknown. Comparing two face images to determine if they show the same person is known as face verification.

This article uses a deep convolutional neural network (CNN) to extract features from input images. It follows the approach described in [1] with modifications inspired by the OpenFace project. Keras is used for implementing the CNN, Dlib and OpenCV for aligning faces on input images. Face recognition performance is evaluated on a small subset of the LFW dataset which you can replace with your own custom dataset e.g. with images of your family and friends if you want to further experiment with the notebook. After an overview of the CNN architecure and how the model can be trained, it is demonstrated how to:

The CNN architecture used here is a variant of the inception architecture [2]. More precisely, it is a variant of the NN4 architecture described in [1] and identified as nn4.small2 model in the OpenFace project. This article uses a Keras implementation of that model whose definition was taken from the Keras-OpenFace project. The architecture details aren’t too important here, it’s only useful to know that there is a fully connected layer with 128 hidden units followed by an L2 normalization layer on top of the convolutional base. These two top layers are referred to as the embedding layer from which the 128-dimensional embedding vectors can be obtained. The complete model is defined in model.py and a graphical overview is given in model.png. A Keras version of the nn4.small2 model can be created with create_model().

$[z]_+$ means $max(z,0)$ and $m$ is the number of triplets in the training set. The triplet loss in Keras is best implemented with a custom layer as the loss function doesn’t follow the usual loss(input, target) pattern. This layer calls self.add_loss to install the triplet loss:

During training, it is important to select triplets whose positive pairs $(x^a_i, x^p_i)$ and negative pairs $(x^a_i, x^n_i)$ are hard to discriminate i.e. their distance difference in embedding space should be less than margin $\alpha$, otherwise, the network is unable to learn a useful embedding. Therefore, each training iteration should select a new batch of triplets based on the embeddings learned in the previous iteration. Assuming that a generator returned from a triplet_generator() call can generate triplets under these constraints, the network can be trained with:

The above code snippet should merely demonstrate how to setup model training. But instead of actually training a model from scratch we will now use a pre-trained model as training from scratch is very expensive and requires huge datasets to achieve good generalization performance. For example, [1] uses a dataset of 200M images consisting of about 8M identities.

The OpenFace project provides pre-trained models that were trained with the public face recognition datasets FaceScrub and CASIA-WebFace. The Keras-OpenFace project converted the weights of the pre-trained nn4.small2.v1 model to CSV files which were then converted here to a binary format that can be loaded by Keras with load_weights:

To demonstrate face recognition on a custom dataset, a small subset of the LFW dataset is used. It consists of 100 face images of 10 identities. The metadata for each image (file and identity name) are loaded into memory for later processing.

The nn4.small2.v1 model was trained with aligned face images, therefore, the face images from the custom dataset must be aligned too. Here, we use Dlib for face detection and OpenCV for image transformation and cropping to produce aligned 96x96 RGB face images. By using the AlignDlib utility from the OpenFace project this is straightforward:

Embedding vectors can now be calculated by feeding the aligned and scaled images into the pre-trained network.

To find the optimal value for $\tau$, the face verification performance must be evaluated on a range of distance threshold values. At a given threshold, all possible embedding vector pairs are classified as either same identity or different identity and compared to the ground truth. Since we’re dealing with skewed classes (much more negative pairs than positive pairs), we use the F1 score as evaluation metric instead of accuracy. 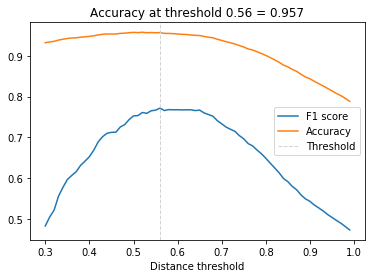 The following two histograms show the distance distributions of positive and negative pairs and the location of the decision boundary. There is a clear separation of these distributions which explains the discriminative performance of the network. One can also spot some strong outliers in the positive pairs class but these are not further analyzed here.

Given an estimate of the distance threshold $\tau$, face recognition is now as simple as calculating the distances between an input embedding vector and all embedding vectors in a database. The input is assigned the label (i.e. identity) of the database entry with the smallest distance if it is less than $\tau$ or label unknown otherwise. This procedure can also scale to large databases as it can be easily parallelized. It also supports one-shot learning, as adding only a single entry of a new identity might be sufficient to recognize new examples of that identity.

A more robust approach is to label the input using the top $k$ scoring entries in the database which is essentially KNN classification with a Euclidean distance metric. Alternatively, a linear support vector machine (SVM) can be trained with the database entries and used to classify i.e. identify new inputs. For training these classifiers we use 50% of the dataset, for evaluation the other 50%. 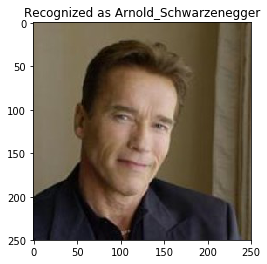 Seems reasonable :-) Classification results should actually be checked whether (a subset of) the database entries of the predicted identity have a distance less than $\tau$, otherwise one should assign an unknown label. This step is skipped here but can be easily added.

To embed the dataset into 2D space for displaying identity clusters, t-distributed Stochastic Neighbor Embedding (t-SNE) is applied to the 128-dimensional embedding vectors. Except from a few outliers, identity clusters are well separated.