This article is an introduction to single image super-resolution. It covers some important developments in recent years and shows their implementation in Tensorflow 2.0. The primary focus is on specialized residual network architectures and generative adversarial networks (GANs) for fine-tuning super-resolution models.

Known downgrade functions are used in image processing pipelines, for example, like bicubic downsampling. With known downgrade functions, LR images can be automatically obtained from HR images. This allows the creation of large training datasets from a vast amount of freely available HR images which enables self-supervised learning.

A more detailed overview on single image super-resolution is given in these papers. A higher-level training API for the example code in this article is implemented in this repository.

Many state-of-the-art super-resolution models learn most of the mapping function in LR space followed by one or more upsampling layers at the end of the network. This is called post-upsampling SR in Fig. 1. Upsampling layers are learnable and trained together with the preceding convolution layers in an end-to-end manner. 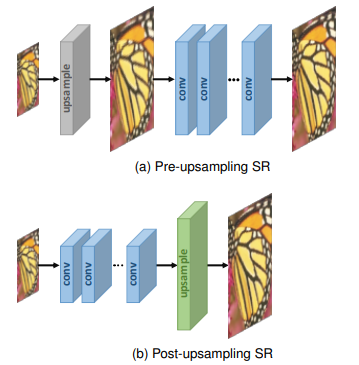 Earlier approaches first upsampled the LR image with a pre-defined upsampling operation and then learned the mapping in HR space (pre-upsampling SR). A disadvantage of this approach is that more parameters per layer are required which leads to higher computational costs and limits the construction of deeper neural networks.

Super-resolution requires that most of the information contained in an LR image must be preserved in the SR image. Super-resolution models therefore mainly learn the residuals between LR and HR images. Residual network designs are therefore of high importance: identity information is conveyed via skip connections whereas reconstruction of high frequency content is done on the main path of the network. 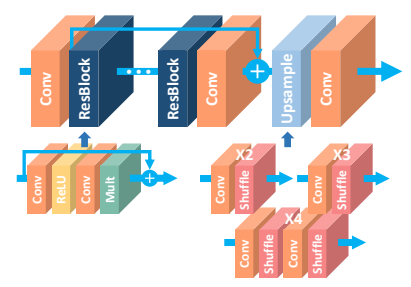 Its residual block design differs from that of ResNet. Batch normalization layers have been removed together with the final ReLU activation as shown on the right side of Fig. 5. 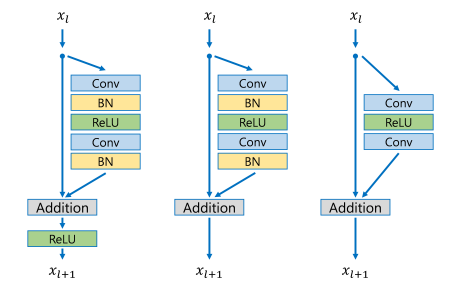 The EDSR authors argue that batch normalization loses scale information of images and reduces the range flexibility of activations. Removal of batch normalization layers not only increases super-resolution performance but also reduces GPU memory up to 40% so that significantly larger models can be trained.

Another super-resolution model is a derivative of EDSR and is described in the paper Wide Activation for Efficient and Accurate Image Super-Resolution, a winner in the realistic tracks of the NTIRE 2018 super-resolution challenge. It makes further changes to the residual block design by reducing the number of channels on the identity mapping path and increasing the number of channels in each residual block without increasing the total number of parameters. The residual block design of their WDSR-A and WDSR-B models is shown in Fig. 6, a Tensorflow 2.0 implementation is available here.

The authors conjecture that increasing the number of channels before ReLU in residual blocks allows more information to pass through the activation function which further increases model performance. They also found that the implementation of weight normalization further eases training and convergence of deeper models so that they could use learning rates that are an order of magnitude higher compared to those used in EDSR training.

This is not surprising as the removal of weight normalization layers in EDSR makes it more difficult to train deeper models. Weight normalization is just a reparameterization of neural network weights that decouples the direction of weight vectors from their magnitude which improves the conditioning of the optimization problem and speeds up convergence.

If you want to skip running trained code in this section, you can download pre-trained models here and use in the next section for generating SR images from LR images.

For training EDSR and WDSR models we will use the DIV2K dataset. It is a dataset of LR and HR image pairs with a large diversity of contents. LR images are available for different downgrade functions. We will use bicubic downsampling here. There are 800 training HR images and 100 validation HR images.

For data augmentation, random crops, flips and rotations are made to get a large number of different training images. A DIV2K data loader automatically downloads DIV2K images for given scale and downgrade function and provides LR and HR image pairs as tf.data.Dataset.

where $H$, $W$ and $C$ are the height, width and number of channels of the image, respectively. The pixel-wise $L^2$ loss directly optimizes PSNR, an evaluation metric often used in super-resolution competitions. Experiments have shown that the pixel-wise $L^1$ loss can sometimes achieve even better performance and is therefore used for EDSR and WDSR training.

A major problem with pixel-wise loss functions is that they lead to poor perceptual quality. Generated SR images often lack high-frequency content, realistic textures and are perceived blurry. This problem is addressed with perceptual loss functions.

A milestone paper for generating SR images with better perceived quality is Photo-Realistic Single Image Super-Resolution Using a Generative Adversarial Network (SRGAN). The authors use a perceptual loss function composed of a content loss and an adversarial loss. The content loss compares deep features extracted from SR and HR images with a pre-trained VGG network $\phi$

were $\phi_l(I)$ is the feature map at layer $l$ and $H_l$, $W_l$ and $C_l$ are the height, width and number of channels of that feature map, respectively. They also train their super-resolution model as generator $G$ in a generative adversarial network (GAN). The GAN descriminator $D$ is optimized for descriminating SR from HR images whereas the generator is optimized for generating more realistic SR images in order to fool the discriminator. They combine the generator loss

with the content loss to a perceptual loss which is used as optimization target for super-resolution model training:

I found in experiments that the SRGAN approach also works very well for fine-tuning EDSR and WDSR models. The following example fine-tunes an EDSR baseline model that was pre-trained with a pixel-wise $L^1$ loss. The definition of the SRGAN discriminator is here.

You can also use the WDSR-B model from the previous section as a drop-in replacement for EDSR by making the following changes in the above code:

If you didn’t run training code in the previous section, download model weights here and extract the downloaded archive. The trained EDSR model can now be used to create SR images from LR images. One can clearly see how fine-tuning with a perceptual loss creates more realistic textures in SR images compared to training with a pixel-wise loss alone. 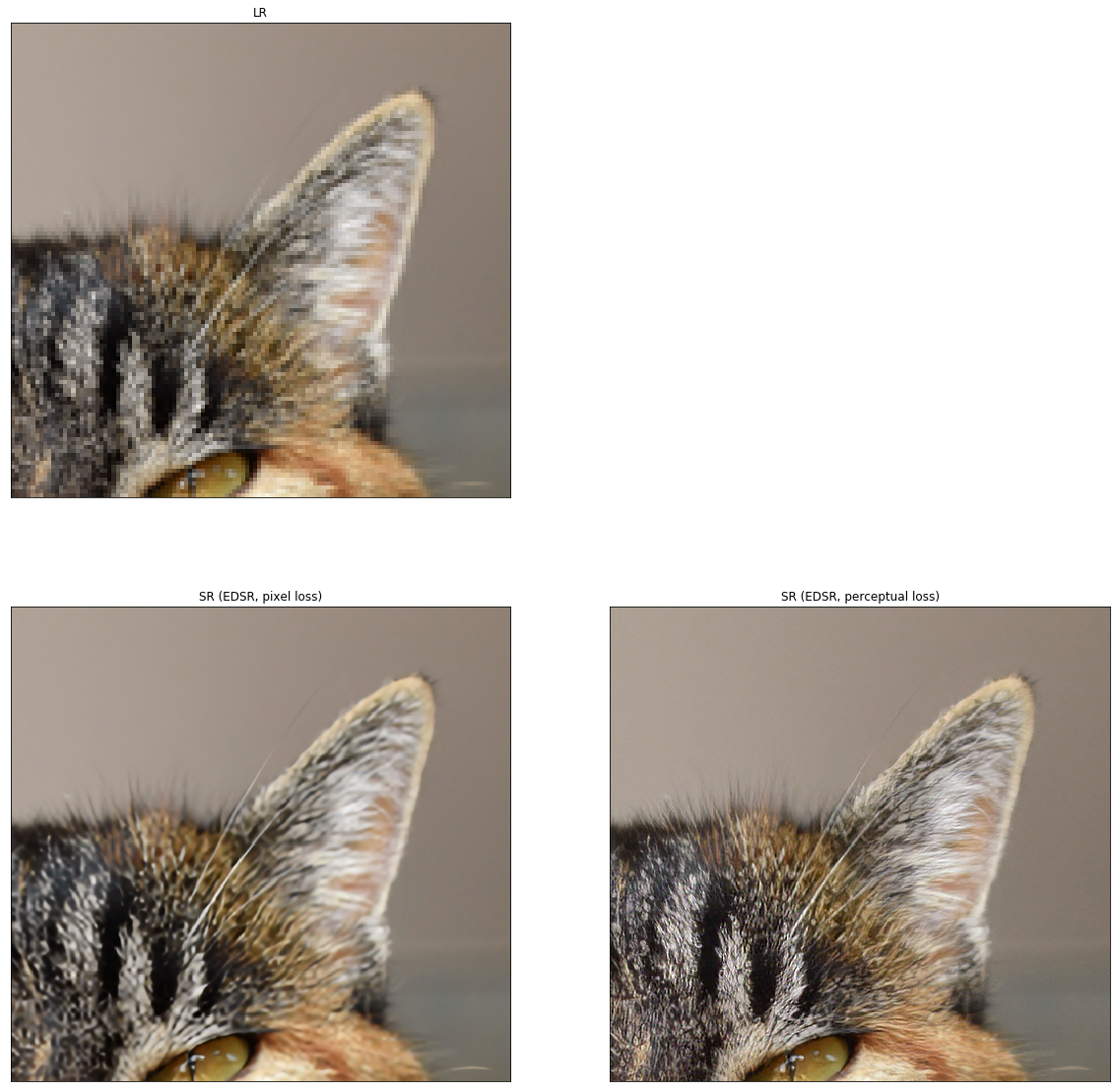 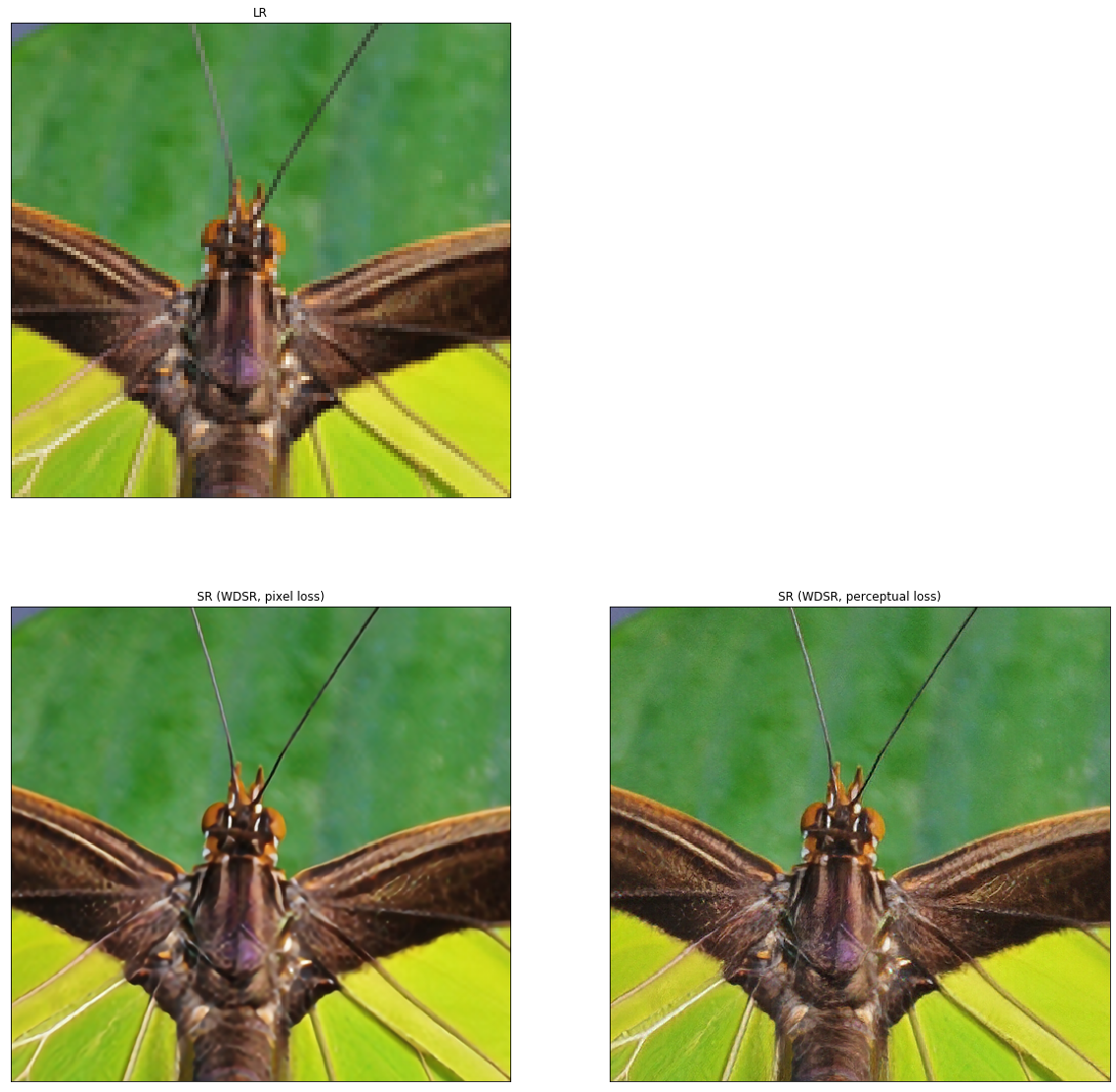