Notebook and code for this article are available here.

In Training Compute-Optimal Large Language Models [1] (the Chinchilla paper) the authors describe how to determine the optimal model size $N_{opt}$ and number of training tokens $D_{opt}$ for a given compute budget $C$, and how $N_{opt}$ and $D_{opt}$ scale with $C$. These scaling laws are applicable to decoder-only transformer language models.

In this article I describe how I applied these scaling laws to Perceiver AR [2] language models and discuss the experimental results. Perceiver AR is a simple extension to a decoder-only transformer, introducing cross-attention to a longer prefix sequence. I run Perceiver AR scaling experiments on small scale, for model sizes ranging from 17M to 108M parameters, but the very same approach can also be used at larger scale.

This suggest that the number of model parameters and number of training tokens should be scaled more or less equally with compute $C$. For actually calculating $N_{opt}$ and $D_{opt}$ from $C$ we still need the factors of proportionality $k_N$ and $k_D$:

The paper doesn’t provide these factors directly, but they can be derived from estimates of $N_{opt}$ and $D_{opt}$ for different compute budgets $C$. These estimates are provided in Tables 3 and A3 in [1]. By fitting $(2)$ to these estimates

Perceiver AR is a simple extension of a plain decoder-only transformer such as GPT-2, for example. A core building block of both is the decoder layer consisting of a self-attention layer followed by a position-wise MLP. Self-attention uses a causal attention mask.

The output of the hybrid attention layer are $n$ latent arrays corresponding to the last $n$ tokens of the input sequence. These are further processed by a stack of $L - 1$ decoder layers where the total number of attention layers is $L$. A final layer (not shown in Fig. 1) predicts the target token for each latent position. The weights of the final layer are shared with the input embedding layer.

Except for the initial cross-attention to the prefix sequence, a Perceiver AR is architecturally identical to a decoder-only transformer. In the following, I refer to this part of Perceiver AR as the self-attention part and to the last n tokens of the input sequence as latent tokens.

For estimating the FLOPs required to train Perceiver AR models I’m using the compute estimates from Table 1 in [3] and additionally include the estimates for the embedding layer and the final output layer as done in Appendix F of [1]. This is implemented in class ComputeEstimator.

The self_attn() method can also be used for estimating the training FLOPs of plain decoder-only transformer models. The results from this method are very close to the common $C \approx 6N$ approximation where $N$ is the number of model parameters including embedding weights.

Each of the following experiments start from a Perceiver AR reference model, a model of given size that has been trained with a given number of latent training tokens $D_{ref}$, resulting in an estimated compute budget $C_{ref}$. For this reference compute budget, a compute-optimal model size $N_{opt}$ is calculated with a scaling law.

The next step is to design a Perceiver AR model with a number of (self-attention) parameters $N_{self}$ that is close to $N_{opt}$. This predicted compute-optimal model and the reference model are trained with the same (self-attention) compute budget $C_{self} = C_{ref}$ to verify that the final loss of the predicted compute-optimal model is less than that of the reference model.

Some experiments include further models, smaller and/or larger than the predicted compute-optimal model and the reference model, to further verify the validity of predictions. The number of latent training tokens $D_{iso}$ is chosen such that all models of an experiment are trained with the same compute budget $C_{self} = C_{ref}$.

All models are trained with a global batch size of 80 sequences where each sequence contains n = 512 latent tokens plus an variable number of prefix tokens depending on the experiment. All training commands are documented here.

All experiments use an Adam optimizer with a maximum learning rate of $2\mathrm{e}{-4}$ which is decayed to $10\%$ over $D_{iso}$ tokens with a cosine schedule. Warmup is over the first $200$ steps. Datasets have been chosen to meet the less than an epoch of data condition (with an approximation).

This experiment trains a series of Perceiver AR models that use a SentencePiece tokenizer, as in [1], with a vocabulary of size $32,000$. The prefix length $m = 1536$. The training dataset is bookcorpusopen.

A Perceiver AR model with num_channels=624 and num_layers=11 has $N_{self} = 7.17\mathrm{e}{+7}$ self-attention parameters which comes close to $N_{opt}$. It will be used as the predicted compute-optimal model.

When training these models under the same self-attention compute budget $C_{self} = C_{ref}$, we can see that the final validation loss of the compute-optimal model is actually less than that of the two other models, consistent with the prediction from the scaling law. The self-attention compute budget $C_{self}$ is indicated by a vertical dashed line. 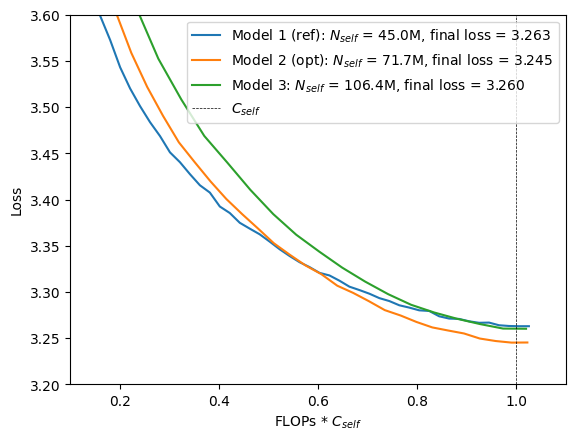 The reference model (model 1 in Table 3) has the same number of channels and layers as the reference model in Experiment 1 but is significantly smaller because of the smaller vocabulary. Optimal model sizes are predicted with scaling laws from approaches 1 and 2:

When training these models, the reference model is the one with the lowest loss. The predicted compute-optimal models, which are bigger, have a higher loss but are still very close to the reference model. It seems that the scaling laws overestimate the optimal model size when using a UTF-8 bytes tokenizer with a much smaller vocabulary, at least on this small scale. 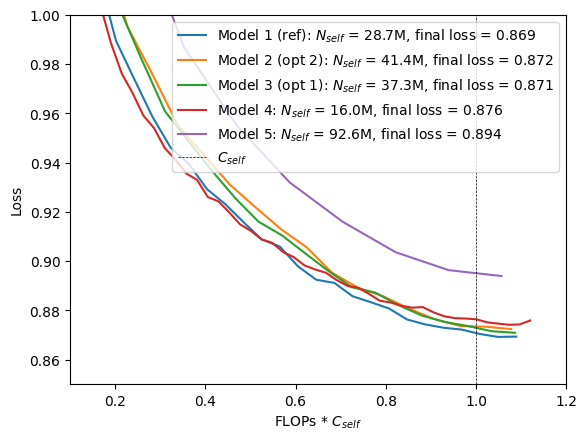 Another reason might be that the model size differences between the reference model and the predicted compute-optimal models are too small. This is supported by the higher losses of models 4 and 5. In [1] section 3.2, the authors also used “a diverse enough set of model sizes” in order to observe a clear minimum in the IsoFLOPs profiles.

Training these two models results again in a higher loss for the predicted compute-optimal model i.e. the scaling laws also overestimate the optimal model size here. This suggest that the smaller vocabulary rather than a longer prefix sequence is the reason why the experimental results do not match the prediction. 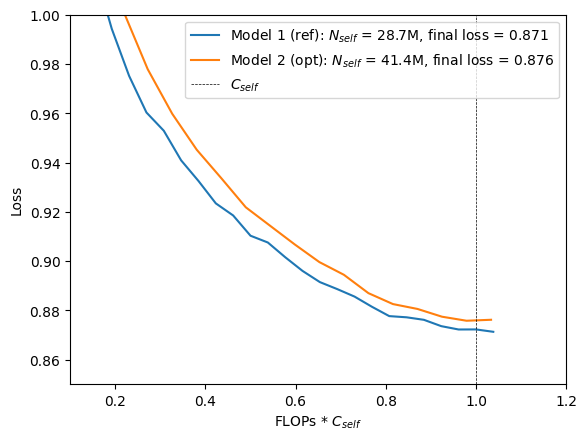 Scaling law predictions match the experimental results when the same tokenizer as in the Chinchilla paper [1] is used (a SentencePiece tokenizer) but they seem to overestimate the optimal model size $N_{opt}$ when using a UTF-8 bytes tokenizer which uses a much smaller vocabulary. These are results from training Perceiver AR models on a small scale. It needs to be investigated if a similar trend can be observed on larger scale too.

The scaling laws can only be applied to the self-attention part of Perceiver AR since they have been derived from training data of decoder-only transformers. The small cross-attention contribution to the overall compute must be taken into account separately when allocating a compute budget. The direct impact of prefix cross-attention on model performance, under a given compute budget, was not analyzed here and requires further experiments.